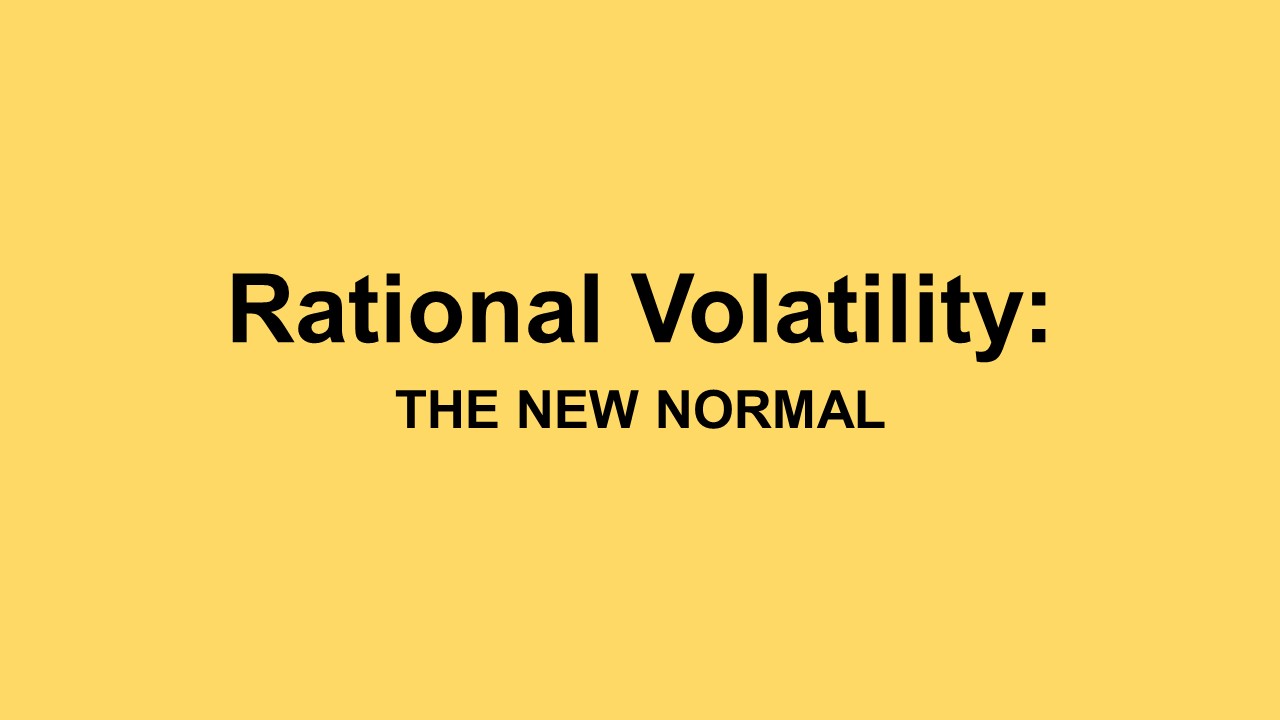 Returning to London after our annual break in the South of France was more interesting than expected. Prior to leaving, I had been reviewing a number of data points and graphics suggesting that markets across most asset classes were fully valued. I had a brief conversation with my wife and decided to hold off on publishing a piece until we returned to London.

My interest was heightened by the fact that the market had been experiencing an unprecedented level of volatility. It now seemed clear to me that those who were making the case for a correction did indeed have a robust argument based on substantive evidence. The main indices across North America, Europe and Asia Pacific fell by up to 17% relative to their highs in July 2015. One can conclude that investors are likely to remain circumspect over the near to medium term. In my experience, when markets are rising on sentiment alone an external trigger is often required for investors to reconsider their asset allocation in order to minimise any potential downside. China provided the perfect storm.

The Shanghai Composite Index has experienced unprecedented growth over the past year moving up over 136% at one stage to reach a 52 week high of 5178 points. Even after the recent correction the Index is still up over 40% relative to its 52 week low. Notably, this is after a Yuan devaluation announced on the 11th August 2015 which followed disappointing industrial growth data released last week. For an economy which has experienced a compound GDP growth rate of 9.9%[i] over the past decade, these two setbacks combined with the prospect of GDP growth dropping off to around 6.9%[ii] by 2017 and potentially more muted international demand by virtue of rising US interest rates one can conclude that many professional investors have decided to sell in order to lock in the gains achieved over the previous 12 months.

Other areas of continued concern with reference to China include the increasing level of overall debt which is evidenced by corporate and consumer debt moving from 125% of GDP in 2008 to 207% of GDP in 2015[iii]. Although it is difficult to determine the quality of this lending one can safely conclude this change in debt burden will act as a drag on growth if economic conditions become any more difficult. Finally, demographic changes, resulting in a rising overall population, are also likely to lead to an increasing level of spend to support those reaching retirement age as this strata of the population continues to expand.

Given the fact that investors have bid up valuations across most asset classes globally, when an economy which is arguably one of the main contributors to global growth starts to experience some difficulty, global markets react. The Chinese malaise has resulted in a ripple effect on global indices with a marked downward shift across most asset classes prior to the recent rally. Equities have experienced significant volatility with the DJIA moving down 13.5% from its July 2015 high at one stage. Other indices followed suit with the Nasdaq (-7.8%), Nikkei (-14.6%), FTSE 100 (-13.2%), DAX (-17.8%) and the CAC 40 (-14.8%) all moving down from their July 2015 highs prior to the rally rounding off the week. Oil moved to just over $40 per barrel prior to recovery. Predictably, investors have sought refuge in government bonds as even gold has experienced some downside. Commodities have also suffered a downward lurch partly due to the expectation that Chinese demand will be less pronounced over the coming years.

One of our most admired finance professors at business school always quoted the pure price earnings ratio of an index when analysing global equity markets. Although now retired, he was an astute investor with robust opinions based on strong fundamental analysis of markets. So it was with this frame of reference that I went looking for evidence of potential overvaluation in the markets a few weeks ago. What I found was a mix of indicators which did indeed suggest that markets were quite fully valued and a downward shift was possible. The following three graphics illustrate that any potential upside in markets will be more muted over the following few years. That is unless there is an abrupt and significant correction over the short term which I am sure few investors would welcome.

The chart below is based on the Shiller Index which tracks the price of an index relative to an average of earnings over the prior ten year period. This is effectively a view of a refined price earnings ratio adjusted to remove the bias involved in utilising a one year earnings figure. Highlighting the Shiller adjusted PE ratio (CAPE) demonstrates that there is a significant departure from the norm which has, until now, only really occurred 3 times throughout a 134 year period. In 1929 (Sep = 32.56), 1999 (Dec = 43.2) and 2007 (Sep = 26.72). As at August 2015 the CAPE stands at 26.45. Many readers will note that prior to this year these were all periods in history which were considered bubbles where asset prices did not seem to reflect fundamentals. This is critical as the current level of the index is 59% above its long term average CAPE ratio level. In other words, if you bought a basket of stocks listed on the S&P 500 today it could well take you 10 years longer than at practically any other time in history to recover the value through earnings generated over the coming years.

Indeed, Robert Shiller, now at Yale University, and John Campbell, now at Harvard University, developed the CAPE ratio 25 years ago and would argue that it could have been used as a leading indicator to highlight potential overvaluation in both 1999 and 2007. In a recent interview[iv], Robert Shiller refers to the fact that he utilises the CAPE alongside a number of other metrics including stock market confidence indices and financial and commercial media to gauge sentiment in the wider market. Shiller goes on to say that often investors can place too much confidence in market rhetoric suggesting we have now entered a period of higher long term productivity and growth which in turn aims to justify consistently higher PE ratios. He goes on to conclude the interview by saying “I think we have to nourish a healthy skepticism as investors and not get swayed too much by the idea that we’re living in a new era”’.

The following chart highlights a strategy that some hedge funds still use to generate above market returns, namely momentum. When applied to a complete market index, in this case the S&P 500, it can be used to highlight significant changes in market sentiment. I have used both a 50 and 200 day moving average to demonstrate that changes in the S&P 500 indicate that there is likely to be a period of volatility with a downside risk exposing investors over the ensuing months.

In a recent interview when describing two of the most important facets of his investing strategy, Paul Tudor Jones of Tudor Investment Corporation, a prominent hedge fund, highlights the use of momentum in his investment strategy:

So as simplistic as this seems in real situations this strategy can be very effective. Many traders will literally have a stop loss threshold which they adhere to on an ongoing basis. In many trading platforms these stop losses can be pre-programmed to avoid any emotional influence on decision making. However, this strategy becomes less effective if there is a very high degree of volatility due to transaction costs. If the recovery this week holds then there is likely to be a period of volatility until a complete correction actually occurs. This could well be a period of months or even extend beyond a year or two. However, given the S&P 500 performance highlighted any upside in equities is likely to be limited relative to any potential downside.

The final chart I would like to share is compiled by the reputed technology sector analyst Mary Meeker, now with Kleiner Perkins Caufield and Byers. The chart below highlights the value generated in US Dollar ($B) terms by both technology IPO’s and private funding. The two high water marks are represented by 2014 and 2000. Although organisations have generally raised funding on the basis of more robust business fundamentals in 2014 the trend is still worth noting. As Warren Buffet continues to highlight one must be circumspect when others are confident and confident when others are fearful. This contrarian view would suggest that a deeper analysis may well indicate that valuations, specifically private market Unicorn valuations, may well be more extended than one would expect. I will explore this thought in my next piece. 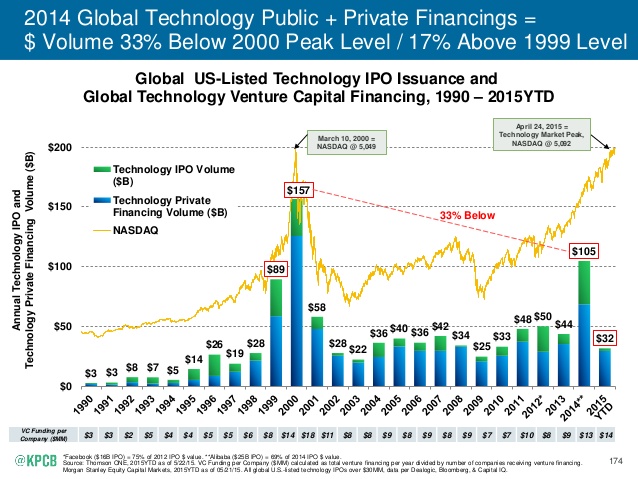 For the moment it is worth leaving you with a quote from Mary Meeker:

When I initially read this, I could not stop myself thinking back to the situation in 2000 but as many observers have highlighted investors have been more rational in their decision making in 2014 relative to the year 2000. Even still if the above quote on internet based valuations holds there are still likely to be a significant number of investors who will sustain losses.