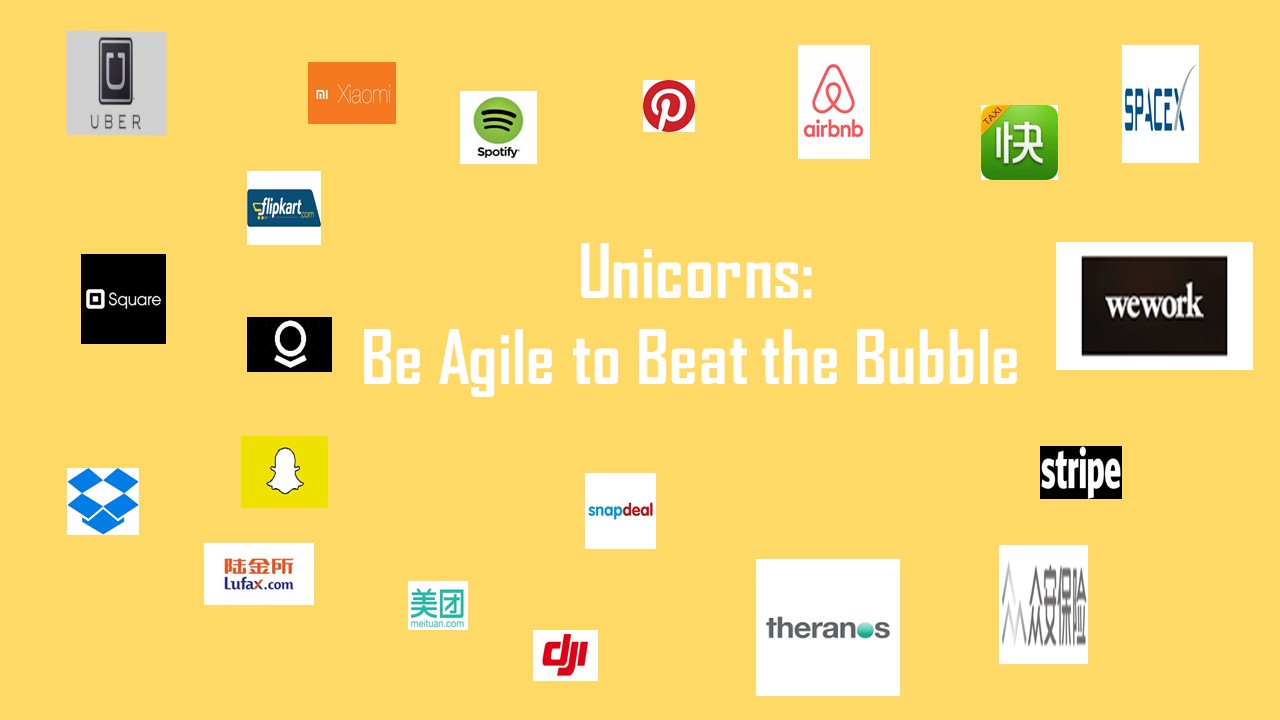 This blog entry reviews the effect a market correction would have on Unicorns, privately held technology organisations. The year 2000 is used as a direct comparison with a number of risk mitigation strategies outlined. The recommendations seek to create an ‘agile stance’ which can allow organisations to cope with a consistent level of market turbulence.

In my last post ‘Rational Volatility: The new normal’ I outlined the case for a potential market correction within the next 18-24 months suggesting that markets were quite fully valued. I also mentioned that prior to a complete correction there is likely to be a period of volatility across most markets. Given the way markets have performed since my last post, I would not change my view. There has been a reasonable level of volatility across equities, bonds, currencies and commodities with the vast majority of markets remaining off recent highs.

Unicorns: Exploring the effects of a market correction

The fortune listing of Unicorns, which tracks privately held organisations worth in excess of $1 Billion, now contains 138 organisations ranging from Uber, the web-enabled taxi company, to new entrant ZScaler, the web security company designed to protect client organisations in an environment where mobile working is increasingly considered the norm.

In a sector which is accustomed to sizable players who dominate almost every facet, the polarisation of winners and losers is likely to be more pronounced in organisations which have yet to come to market. This is only natural as many of the propositions have yet to experience a rigorous market test over a prolonged period of time.

The graph below highlights the top 20 organisations defined as Unicorns. On a combined basis, these organisations are valued at $298Bn which equates to around 60% of all Unicorn organisations in terms of valuation.

The top 20 Unicorns represent 60% of all Unicorn organisations by value.

So what is different this time around?

There are similarities with the situation in 2000 where the market was widely considered to have been in a ‘bubble’. That market correction led to the collapse of a number of technology organisations. It is sad to say that it is almost already possible to predict organisations which are likely to survive and those likely to experience difficulty if the economic environment deteriorates.

Fortunately, there is one significant difference in the situation today. Many of the innovative organisations, Unicorns, are privately owned. As a result, a number of factors are likely to not only influence which Unicorn organisations survive but also how the various investors are affected and the type of measures which should be put in place to mitigate any risk to Unicorn organisations.

Many of these factors are directly related to the fact that Unicorn organisations are predominantly financed via Private Equity Houses.

An important factor – ‘The Denominator Effect’ at play

If a correction does occur, Private Equity funding sources are likely to limit any further investment as their main investors, pension funds, are often mandated by their trustees to have a specific element of funding dedicated to what would be considered high risk, high reward investments.

An example of this dynamic would be a large, say $100Bn, pension fund which dedicates 2% or $2Bn of its portfolio to private equity investment. If the market falls around 20% and the pension fund portfolio experiences a similar fall then any funding dedicated to private equity should also fall 20% to $1.6Bn (2% of the revised $80Bn valuation) in a rebalancing exercise.

This would remain the case until either a divestment occurred or the private equity house distributed proceeds back to the pension fund. As a result, the pension fund would be unlikely to make any further illiquid private equity investments. If a significant number of larger private equity funding sources take this position, which is likely, the result will be a squeeze on any additional funding. This could arguably remain the case until markets or pension fund portfolios surpass previous valuation levels which could take a number of years. As always, there are exceptions to the above, pension funds can invest in fund of funds which would make this type of investment more liquid.

The opposing argument assumes there will always be funding available for strong ideas. Given the above, I would argue that this would be more limited for some time after a significant correction. This was certainly the case in both 2000 and 2008.

Private equity investors have a number of provisions in place in order to minimise losses:

As for how the wider market would be affected by a collapse in Unicorn valuations, in purely financial terms, the impact is likely to be minimal. The financial effect of a collapse in Unicorn valuations on global markets will be relatively insignificant as the total value of all privately held Unicorns does not exceed $500Bn. On a combined basis, all Unicorn organisations tracked in the fortune listing would be broadly equivalent to either Apple ($664Bn) or Google ($446Bn) in terms of market capitalisation at the time of writing.

The timing of any revaluation of a Unicorn will be staggered relative to a public company as there is no real market test of value on a day to day basis. In some instances, a formal review with a verifiable value may not be achieved until a further round of funding is sought by the portfolio company in question. Although pension funds will write down the value of any private equity investments if warranted, a refined assessment of value would remain elusive until a market test occurred.

Given the above analysis, one can anticipate how the market and investment climate is likely to change for Unicorn organisations if there is a significant market correction in the next 18-24 months. In order to increase the likelihood of survival, Converge Advisors and Associates would urge high growth, cash-hungry technology firms to develop an ‘agile stance’ over the coming months. Outlined below are a number of measures which would facilitate this stance effectively minimising risk to the organisation.

Ensure funding is in place to enable the organisation to remain self-sufficient for a period of up to 36 months given the current growth trajectory and burn rates.

If this means seeking an additional round of funding or securing a tentative agreement for further funding from a private equity house or another source the relevant action should be taken over the coming months if sufficient capital is not already in place.

This essentially involves maintaining a high level of variable costs which can be reduced significantly over a short period of time. An example of this could include leasing additional space on a short-term basis and / or employing all but a small core of staff on an interim or consulting basis.

In some instances, this will involve a change in mentality for founders who did not live through a difficult fundraising environment in the past. An example of this would include minimising the development of new functionality in order to focus on the core product or elements which will result in a direct uplift in value.

At the very least, Unicorn organisations should exercise caution and develop scenario planning around cashflow and profitability in turbulent markets. This would go some way towards ensuring that any risk to the organisation is minimised.

As a grouping, Unicorns bring critical, pioneering innovation to market. They represent some of the most important aspirations we have for technology led progress. In many instances, we would be doing ourselves a disservice if the lessons from the past were not relayed in a way which ensured their survival.

[i] Lee coined the often used Silicon Valley term “unicorn” in a TechCrunch article “Welcome To The Unicorn Club: Learning from Billion-Dollar Startups” as profiled in a New York Times article. A unicorn is generally defined as a privately held startup that has a $1 billion valuation – something rare (like a unicorn)